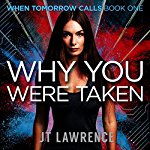 “In tomorrow’s world prowls a creative and ruthlessly efficient assassin who won’t stop until Kirsten is killed.

A troubled woman approaches Kirsten with a warning and a key and is later found dead. Was the woman just another victim of the Suicide Contagion, or is there something more sinister at play? The key leads Kirsten to the Doomsday Vault and a hit list of seven people – and her barcode is on it.

Edgy and original, Why You Were Taken is a dark cinematic thriller that will keep you guessing till the last.”

This was the first book I have listened to that’s set in South Africa and what a picture it painted… sure, it’s set in the far future but it still sounds like a brilliant place.

I do love all things Sci-fi and futuristic so this was right up my cyber ally, the sights the sounds, it was all very visual I loved it.

The story portrays poor Kate, thrust into a world of belief, family, murder and mystery. It all starts with a warning from a troubled women and spirals from there. I was hanging on each twist wanting to know what happens next.

Two timelines run throughout this story which may put some people off trying to follow it, but trust me it’s really easy and the two timelines give even more meat to the story.

All the various characters who appear in this story are all strong and believable, if I was ever in this situation I know I would like the good ones in this story on my side.

The teller of this story is Roshina Ratnam, a new voice to me but one i could happily listen to again, she has a nice flow and is not in your face and she doesn’t try to be something she isn’t.

If I had to sum this book up in three words, it would be “gritty, visual and brilliant”, if you like cyberpunk thrillers or just thrillers then give this one a listen.

You can Find it here:

You can find out more about JT Lawrence here: https://jt-lawrence.com/